What Was Really Served at the First Thanksgiving? Lobster and Duck, Probably Not Turkey, and Definitely No Potatoes 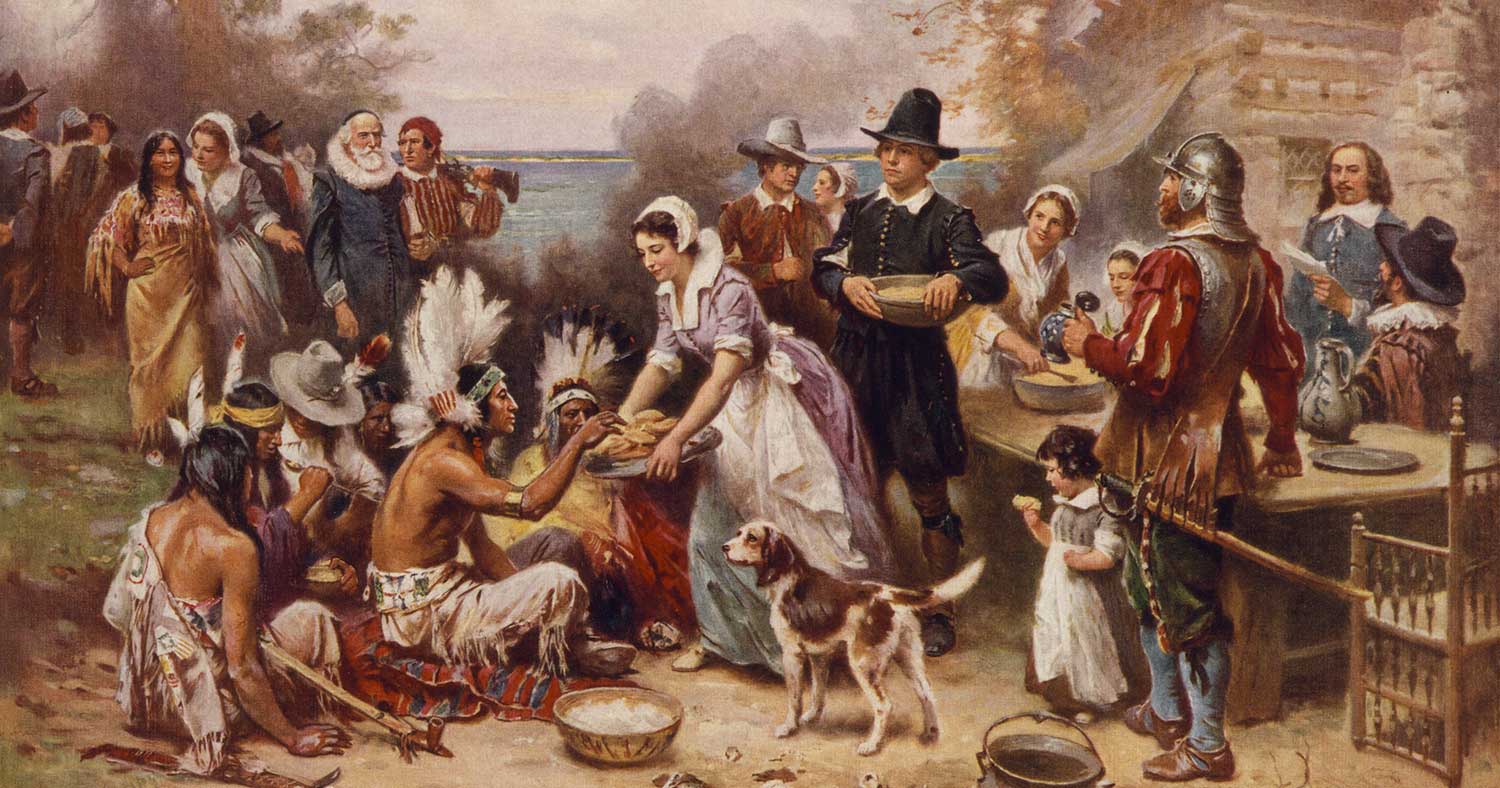 History of the First Thanksgiving

The first Thanksgiving was a celebration in 1621 for European colonists’ first successful harvest in the New World. It was a three-day festival held (probably) closer to the beginning of fall at the end of the harvest season, rather than in late November (though the exact date isn’t known). The event was attended by New England pilgrims of the Plymouth Colony, Massachusetts, and the Wampanoag Native American tribe, who had taught the colonists how to plant many of the local crops of the period.

There are only two historical documents that detail firsthand knowledge of the event and what was served: Plymouth Governor William Bradford’s On Plymouth Plantation, and pilgrim chronicler Edward Winslow’s journal that detailed parts of the event. Outside of these sources, the leading expert on the matter is Kathleen Wall, a foodways culinarian at the “Plimouth Plantation” living history museum in Plymouth, who has formed educated guesses by studying “cookbooks and descriptions of gardens from the period [and] archaeological remains such as pollen samples that might clue her into what the colonists were growing,” according to Smithsonian Magazine. 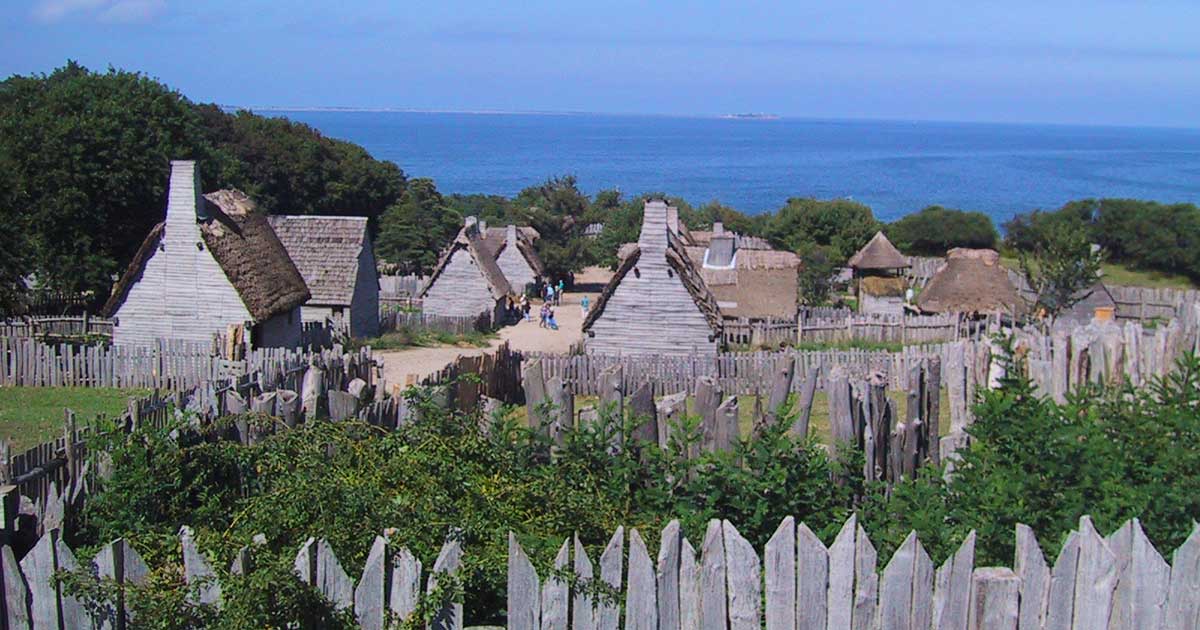 The Thanksgiving holiday, as we know it today, was started in 1863 when President Abraham Lincoln was convinced to hold a national day of celebration to try to unite the country during the Civil War. From then on it became an annual tradition hosted on the last Thursday of November and was officially decreed a national holiday by Congress in 1941.

Get to the Meat of It: Meats Served at the First Thanksgiving 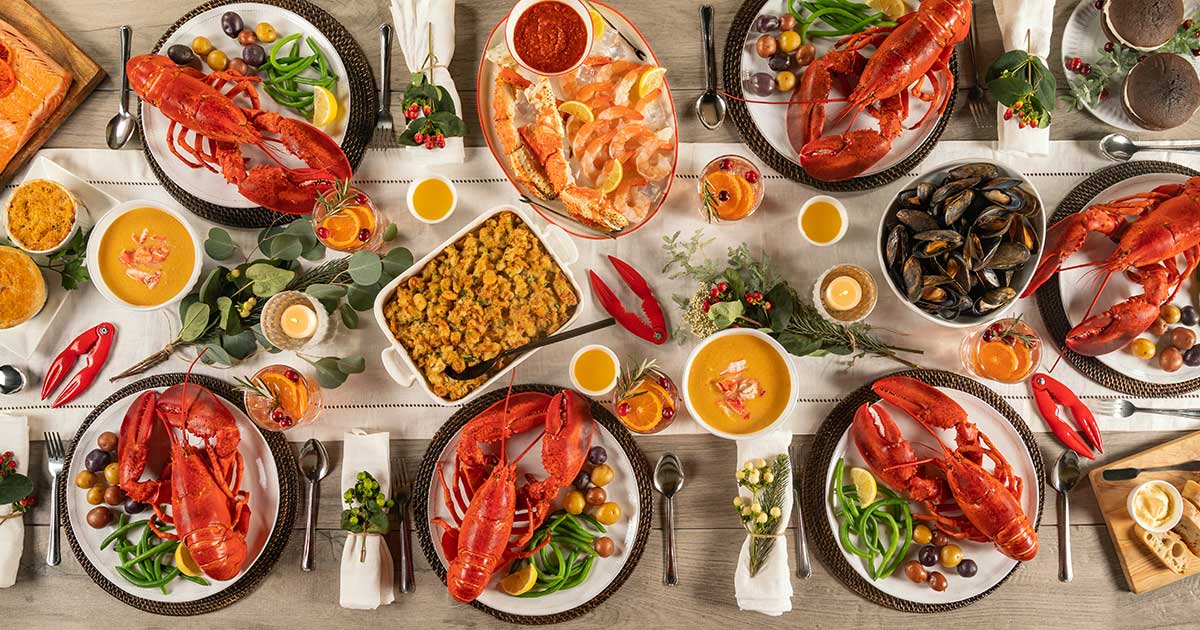 The main dish at the table of the first Thanksgiving was likely not one dish at all. While turkey may have been present (wild turkeys were common to the colonial area), no documentary evidence exists that turkey itself was served. If it was, it likely wasn’t the main meat source.

As Winslow noted in his journal: “Our harvest being gotten in, our governor sent four men on fowling, that so we might after a special manner rejoice together, after we had gathered the fruits of our labors; they four in one day killed as much fowl, as with a little help beside, served the Company almost a week.”

According to History.com, this fowling expedition was more likely to return with ducks, geese, or swans, which the colonists could more regularly hunt compared to the more elusive wild turkeys that lived in the region at that time.

Of course, like modern-day New England, shellfish and fish were regularly consumed in colonial times as well. Wall says that lobster, mussels, clams, eels, and other fish were more than likely present at the first Thanksgiving considering how abundant they all were at the time. Even Winslow documented the plentiful seafood the colonists regularly harvested in those days:

“Our bay is full of lobsters all the summer and affordeth variety of other fish; in September we can take a hogshead of eels in a night with small labor, and can dig them out of their beds all the winter. We have mussels... at our doors. Oysters we have none near, but we can have them brought by the Indians when we will.”

Additionally, Winslow wrote that members of the Wampanoag “went out and killed five deer, which they brought to the plantation and bestowed on our governor, and upon the captain and others.”

So while our Thanksgiving dinner table has a big ol’ turkey plated in the center, the first Thanksgiving table was likely filled with ducks, geese, eels, lobster, and venison. Maybe there was a turkey, but it was either missing or too dry for anyone to literally write home about it.

Was Stuffing Served at the First Thanksgiving?

One of the classic staples of modern Thanksgiving dinners is the stuffing. But the stuffing we consume today is very different from what was likely made back then.

Even if turkey wasn’t on the first Thanksgiving menu, the other fowl they consumed would have been stuffed. Unlike today though, squares of bread were not used. Instead, the birds were often stuffed with onions, herbs, and nuts.

“There is a wonderful stuffing for goose in the 17th-century that is just shelled chestnuts,” Wall told Smithsonian.

Were Mashed Potatoes Served at the First Thanksgiving? 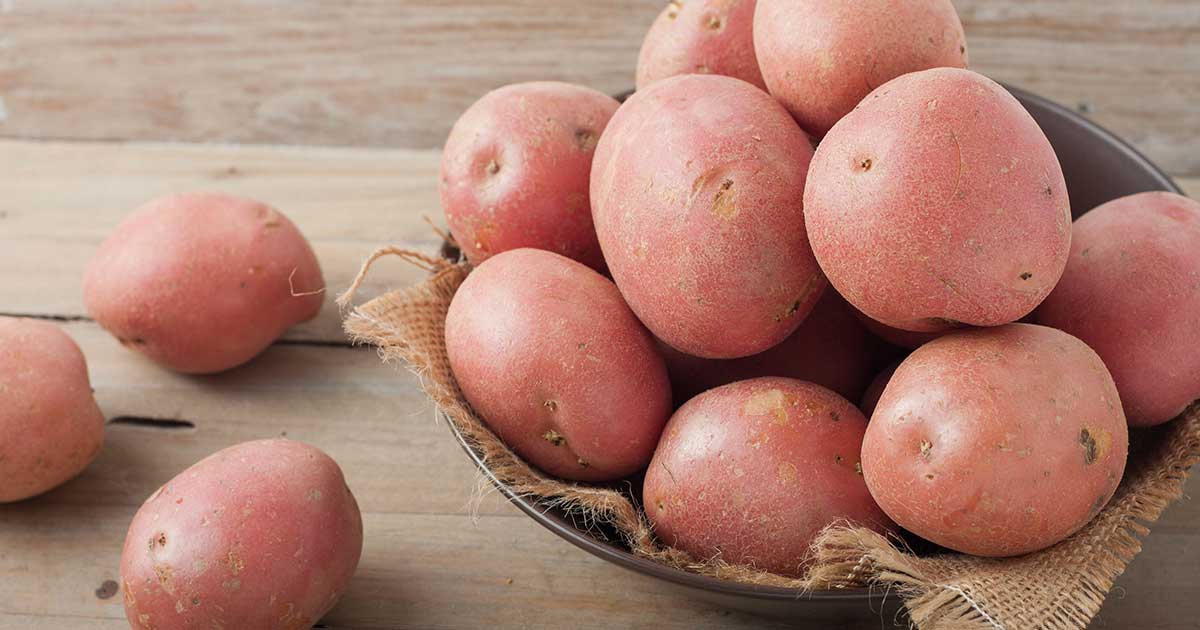 I don’t know about you, but one of my favorite sides at Thanksgiving is mashed potatoes with gravy. And potatoes have become a staple of New England seafood meals as well. But back in 1621, they literally had no place at the table.

Potatoes had only been introduced to Europe around 1570 when Spanish colonists brought them back after learning about them in South America. In 1621, the vegetable had not yet made its way to the colonies. And sweet potatoes were first discovered in the Caribbean, but they too had not been introduced into North America at the time of the first Thanksgiving.

Instead, it’s possible the pilgrims ate turnips or groundnuts harvested by the Native Americans, but no documentary evidence shows either were at the first Thanksgiving table.

What About the Cranberry Sauce?

While many may pass on the cranberry sauce at Thanksgiving, I love the tart flavor mixed with juicy cuts of turkey. It’s too bad the pilgrims weren’t able to experience it.

The first historical reference of something representing cranberry sauce was nearly 50 years after the first Thanksgiving when an Englishman wrote of his culinary exploits boiling cranberries and sugar together to make a “Sauce to eat with...meat.”

Did They Have Pumpkin Pie at the First Thanksgiving?

If you’ve enjoyed filling up on information about what was served at the first Thanksgiving, we hope you left room for informational dessert. When it comes to dessert at the first Thanksgiving celebration, there’s no documented evidence of what the pilgrims and Native Americans may have had (if anything). But it’s pretty clear they did not have pumpkin pie or any pie for that matter.

The colonists lacked wheat flour and butter necessary for making pie crust. However, pilgrims and Native Americans did regularly consume pumpkin and squash (both of which may have been present) and there’s one dessert-like food made with pumpkin they could have had.

Several settler accounts detail how they would hollow out a pumpkin, fill it with milk, honey, and spices, and roast it over hot ashes to make a custard-like recipe. Who knew the pilgrims were so fond of pumpkin spice flavors 400 years before it became a fad?

So there you have it. Historical evidence and firsthand accounts suggest that the Thanksgiving dinner that millions enjoy each year is a far cry from what the original New England settlers had at the first Thanksgiving. New England today is world-renowned for its seafood offerings and history suggests the pilgrims and Wampanoag Native Americans subsisted on lobster, mussels, and other fish and shellfish as regular parts of their diets. It’s probable all of these were served at the first Thanksgiving, while many “traditional” items we eat today were not present at all. If you were thinking of adding lobster to your Thanksgiving Day traditions, rest assured the pilgrims would agree.