Diving Into the Fascinating Life of a Lobster Mother

Here’s a note from Captain Obvious: The role of the mother is supremely important for any species, and it’s no different for lobsters. But like many ocean-dwelling creatures, humans don’t know much about the life of a lobster mother.

As lobster lovers, we’re always working to share the best information about how nutritional and tasty lobsters can be, but we also want to provide folks with a better understanding of how lobsters live and what we do to keep them sustainable. Because when we care for lobster populations, we all can continue to enjoy lobsters well into the future.

With Mother’s Day fast approaching, let’s dive deep into this ocean of mystery to reveal everything you need to know about the life of a lobster mother.

How to tell if a lobster is female

To quote Dr. Ian Malcolm in Jurassic Park: “How do you know they're all female? Does somebody go out into the park and pull up the dinosaurs' skirts?” There are no lobster skirts to speak of, but there are two noticeable differences between male and female lobsters:

From the time she hatches, it takes a female lobster about one year to become fully grown. By this time, she will have shed her old shell and grown a new, more firm shell. This process is known as molting and the female (as well as males) will continue to molt throughout her life. When she’s full size, she can start to reproduce.

Several female lobsters will mate with one alpha lobster (bow chica wow-wow). In a group of lobsters, the males will fight for dominance by locking together in an attempt to crush one another’s claws. This can, and often does, involve more than two lobsters at a time and can last for days. The last male lobster standing (swimming?) will then mate with as many female lobsters in the surrounding area as he can.

When a female is ready to mate, she will let him know by traveling to the alpha male’s den and releasing a pheromone near the entrance. The pheromone will help convince the male to allow her to enter the den where she will stay up to 2 weeks. During this time, the female will shed her exoskeleton and the male will deposit sperm packets into her abdomen. The sperm is stored for up to 15 months after she leaves the den, until the expecting mother is ready to lay her eggs. For the male, he will await another female to start the process again. 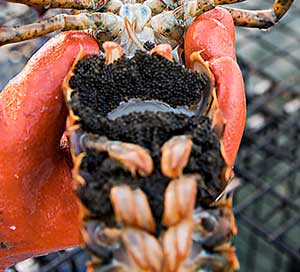 Once the eggs are fertilized, the female lobster will gather and store them under her tail for 9 to 12 months. Because the eggs look like dark berries as they mature, female lobsters with eggs are often referred to as “berried lobsters.” On average, a female can carry between 7,500 and 10,000 eggs. Larger, older females have been found to carry up to 100,000 eggs at a time.

Ask any lobsterman and they’ll tell you that it is the law in Maine that any female lobster caught with eggs must be released. This is a long-held practice designed to help keep lobster populations sustainable. As part of this effort, lobster fishers will “v-notch” the tail of the female to help other lobster fishers quickly identify these females.

After 9 to 12 months have passed, the female lobster will find a safe place to release her eggs. If she doesn’t find a safe place, the buoyant eggs will float up and likely be eaten by other fish. On average, 10% of her eggs will survive long enough to reach adulthood.

Lobster babies look like larvae when they first hatch, but after molting roughly 4 times, they start to resemble the adult lobster that we all recognize. These tiny crustaceans will molt another 20 times over the next 6 to 8 years before they are grown enough to reproduce or be caught for eating.

Fully understanding the life journey of any creature is an important part of harvesting them sustainably and ethically. At Maine Lobster Now, we are dedicated to protecting the Maine lobster populations and keeping their habitats healthy. Our live lobsters are wild-caught sustainably off the coast of Maine. Love lobster? Don’t miss out on enjoying fresh lobster right at home with your friends and family.