Sustainable lobstering practices have been in place in Maine for well over a century. The word sustainable means, "able to be maintained at a certain rate or level". The goal of sustainable lobster fishing in Maine is to maintain a healthy lobster population. Maine is famous for its long and jagged rocky Atlantic coastline where nature made a unique habitat in its pristine Gulf of Maine waters for our famous Maine Lobster! The Maine Lobster (species name, Homarus Americanus, sometimes referred to as the "American Lobster" or "New England Lobster" to include the 10% of lobsters caught outside of Maine waters) was once served only to Maine state prisoners during the 1800's. Since then, lobster has become, by far, Maine's largest fishery and seafood export. Indeed, the Maine Economy is dependent on this tasty natural resource and, so, we Mainers take the long-term health of the Lobster stock and the ecosystem that supports this rare creature very seriously.

Accordingly, sustainable lobstering practices have been in place in Maine for over a century. The word sustainable means, "able to be maintained at a certain rate or level". The goal of sustainable lobster fishing in Maine is to maintain a healthy lobster population without fishing it down to biomass levels where lobster reproduction and juvenile lobster growth rates would not easily keep pace with harvests. The Maine Department of Marine Resources (DMR) regulates various parts of the fishing process to maintain what biologists estimate to be a healthy amount of lobsters in a given area. The DMR will frequently work with the University of Maine Lobster Institute (to which we are a proud sponsor!) to continue to research lobster migration patterns, reproductive cycles, and the impact of different types of fishing (not just lobstering but draggers, also known as fishing trawlers and other fishing vessels) has on the lobster population.

Trap Limit For Each Lobsterman

Why Sustainability Matters Now More Than Ever

The lobster harvest is growing annually. The worldwide demand for lobster has grown significantly along with the amount of lobsters being harvested. With such a booming demand for lobsters in Asia, and only a limited supply, to keep the overall lobster population is critical for sellers and buyers alike. As you can see, the volume of lobsters being harvested is higher than ever, and so is the amount being exported. If the lobster population starts to decrease there will most likely be more limitations on harvesting and the price may actually discourage current buyers, so sustainability is playing an ever growing role in local and world economies alike. The bottom line, sustainability is great for everyone! 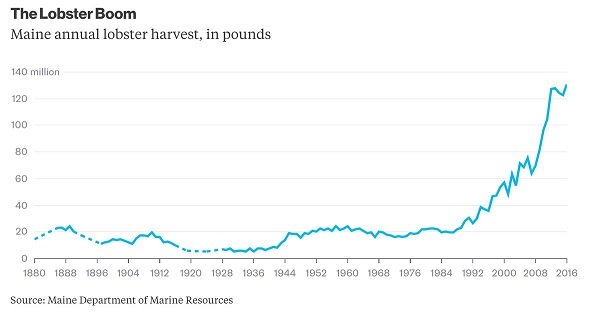