Weathering the Winter for Maine Lobster 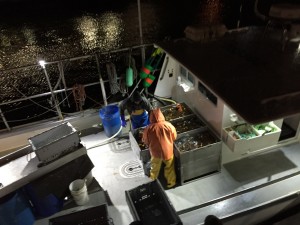 Lobstermen sorting Live Maine lobster On The Boat Every day we talk to hundreds of people from all over the country with questions about wild caught, Maine lobster. In January and February, we are often asked if lobsters are available in the winter months. Questions like “Do they actually catch lobster in the Winter? Isn’t it cold and icy?” And the answer is yes, there are many lobstermen who brave the cold, snow, wind and rough seas to bring home their catch during the winter months. They are a hearty bunch who throw on a few extra layers and foul weather gear to keep working through the weather to bring you wild caught, Maine Lobster year round. In Casco Bay, home to most of the boats that supply Maine Lobster Now (MLN), about 30-40% of the lobstermen fish year round. Those that pull their traps in for the winter usually do so in December or early January. The ones that keep fishing are allowed 800 traps in the water which is the same as the summer months. With that said, in the summer the lobsters are caught within 0-3 miles of shore. This time of year, lobstermen travel 20-40 miles in search of offshore run lobsters. In past years, the price of diesel has kept more fisherman at the dock in the winter. However, this year with diesel at $2.40 per gallon at the docks, more lobstermen have continued to keep fishing. 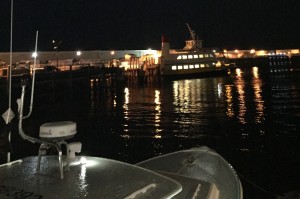 I caught up with Captain Hugh Bowen of the Long Haul out of Portland this week to ask him a few questions about winter lobstering. Klenda Seafood, our supplier of live lobster and fresh lobster meat, buys exclusively from Captain Bowen ensuring that we have fresh lobsters to deliver to your door even during Winter. I asked what time they started that morning and Hugh said “Late, about 5am. We usually start at 3 or 4am depending on the weather and tide. The day ends when we unload the catch at 6 or 7pm.” Captain Bowen keeps all 800 traps in the water during winter and he and his two-man crew haul them every two to three days. Winter lobstering is very different than Summer lobstering. Lobsters move offshore when the water cools in the fall and lobstermen have to travel further to catch them. The lobster is also more spread out, and boats tend to catch less lobster in the Winter with more effort required. With that said, the price per pound for lobster is usually higher in the winter with less supply available and fisherman can make as much money for a day’s work as in the summer. However, they have to brave rougher seas, colder air and icy decks which makes it a much more dangerous work day. As consumers of Maine Lobster, give thanks to the brave and salty local lobstermen of Casco Bay! Let’s be honest, they endure the long, cold, wet days for their paychecks. But they also rely on companies like ours to continue to purchase lobster from them year-round. They value our partnership as much as we do, knowing they have a steady stream of demand for the product they work so hard to harvest. We are certainly proud to be part of the local lobster community. We support local fisheries, local lobstermen and local businesses, all of whom contribute to the economic stability of the State of Maine. And in turn, you contribute by purchasing your lobster from Maine Lobster Now which supports the economy of the state we call home. We thank you for your continued patronage!   Written by Todd W. Miller, GM Maine Lobster Now
← Previous
Related Posts
Related Products